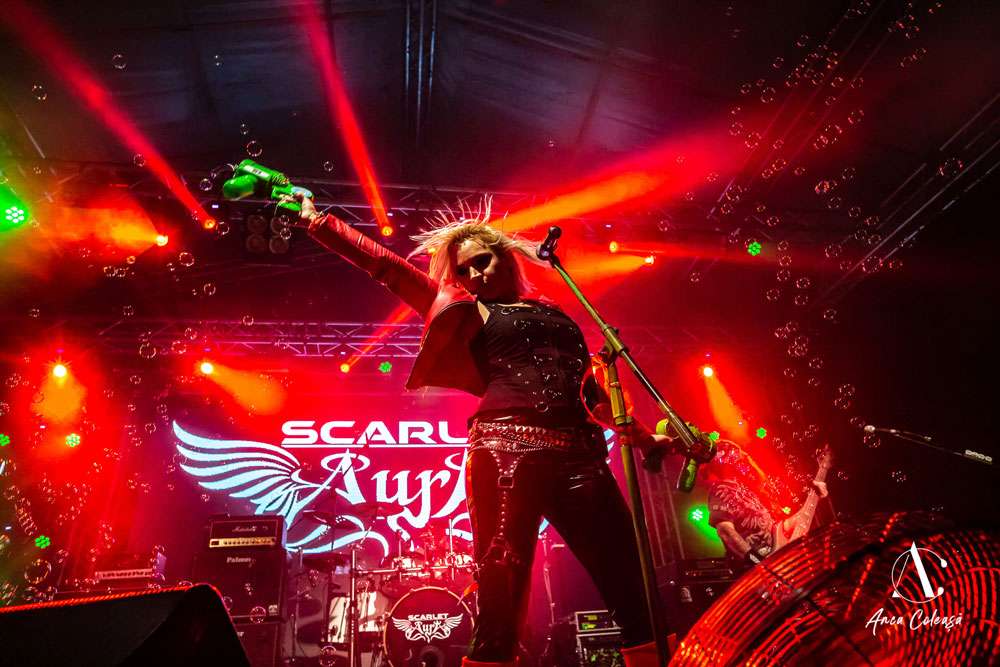 Coming from the country known for its mountains and greenery, vampires and Dracula’s castle, countless medieval fortresses, the Black Sea and of course, beautiful women, Scarlet Aura is not a traditional Romanian metal band and is one of a kind because of heavy metal approach, the powerful female vocals and the stories behind the songs, combined with the modern production and sound. The band brings something special and different, especially in their latest conceptual trilogy. Scarlet Aura is Romania’s most reliable heavy metal export, entertaining people with powerful shows from Western Europe to China.

Inspired by the likes of power and heavy metal bands from Iron Maiden, Helloween, Accept to Sabaton, Scarlet Aura brings their own twist into this game: combining hot and heavy riffs, thunder bass and drums on steroids with powerful and husky female vocals, reminiscent of Doro or Bonnie Tyler. Not surprisingly the sparkling front angel – Aura Danciulescu has been named “Princess of Metal”.

Their latest offering – new album Genesis of Time (out on 10.09.2021 via Universal Music and Silver City Records) – is the final installment of “The Book of Scarlet” trilogy which has 3 musical albums and 3 fantasy book volumes that are depicting the world of Scarlet for listeners and readers – part of which are predecessors Hot’n’Heavy and Stormbreaker albums. Following the success of Stormbreaker, which has landed on editorial playlists and topped the national iTunes Charts, Genesis of Time has been named as “the best album of Scarlet Aura” and landed on many playlists and brought for the band a feature on Metal Hammer Germany.

The musical and lyrical landscapes created by Mihai Danciulescu with texts by Aura weave intricating tales of strength and passion, friendship and betrayals, heartbreaks and love stories, dreams and inspiration, power and wisdom and send powerful encouragement and a message to their listeners. They strive to write music to empower humans and make the world a better and more equal place, their passion for metal made them to overcome their own boundaries and turned them into a real metalhead family: and this is their story.

Having formed in 2014 (at that time under the name AURA), the band signed a record deal with Universal Music Romania the same year. The unleashing of their debut album The Rock Chick (2014) helped the band to quickly gain fanbase and AURA was invited as opening act at the numerous metal concerts. The album presented mix of alternative, pop rock and me- lodic/heavy metal, with 10 songs sung in Romanian. Same year they won first place and public award at the “Black Sea Battle of the bands” at the Kavarna Rock Fest. Meanwhile AURA reached headliner status on festivals in Eastern Europe. In 2015 the band announced their new name “Scarlet Aura” at their show in Bulgaria, opening for the Accept, marking the official The band’s 2nd album Falling Sky was released in 2016 and was accompanied by European Tour with Finnish Queen of Heavy Rock Tarja Turunen. Falling Sky became the first English record for Scarlet Aura, presenting much more heavier rock sound and being produced by Roy Z and gaining the band title of “THE new discovery and hottest favorites for the throne of Melodic Metal”. Scarlet Aura’s first headline run throughout the Continent in 2017 rounded off their Falling Sky touring cycle.
In September 2017 Scarlet Aura released their 3rd album - the tribute cover CD Memories presenting and reinterpreting 11 classical Rock and Metal songs in their own unique style and went on their second headline tour across Europe, finishing the year opening at the ARENELE ROMANE in Bucharest for DIO RETURNS.
But the band didn’t rest on their well-deserved laurels and instead made 2018 the most successful touring year in their still rather short history.
Scarlet Aura joined Italian symphonic metallers RHAPSODY Reunion on their extensive 20th Anniversary Farewell Tour across Europe, where the band visited a number of countries and cities for the first time ever. Since then, Scarlet Aura have become a staple in the European metal scene with their powerful live shows and crushing heavy metal. That tour was supported by Wacken Foundation.
Despite their extensive touring schedule, the band managed to achieve something else in the past few months – in July 2018 Scarlet Aura announced their 4th to-be-released album Hot’n’Heavy and a tour with Brazilian power metal band Angra as a special guests for the North America tour supporting the release. The band went on headlining tour in Europe in September 2018 (Ukraine, Russia and Baltics) and 26 shows headlining tour in China in November – December 2018, promoting the Hot’n’Heavy album.

Hot’n’Heavy was released in March 2019 via Silver City Records. The album marked new direction for the band, with heavy influences from symphonic and power metal to heavy metal, but within unique sound and vision of Scarlet Aura. With this album, the band brought a heavy sound, and more dark and deeper lyrics about finding your true meaning and how to be yourself, how to dare to be different and have no fear as one never be alone through music, the right to fight for what you believe in and also for love, for friendship and music.

At the same time, it also set the new milestone for metal bands history: it started the first part of a conceptual trilogy called The Book of Scarlet, which consists of 3 albums and accompanying fantasy books.
The books are written by Aura Danciulescu and combine the lyrics of the songs from the albums with the story of “Scarlet” that alongside the album immerse the audience into the amazing world of Scarlet Aura. The first book in the trilogy that went together with Hot’n’Heavy was The Book of Scarlet – Vol.I Ignition.
In 2019 Scarlet Aura focused mainly on writing new material and on preparing their fifth studio album Stormbreaker, which was released on March 27, 2020 – the 2nd album from the trilogy. The first single High In The Sky was released in August 2019 and revealed the style, sound and the band’s direction for the upcoming Stormbreaker has showcased band’s new growth in many directions with yet another level of songwriting. The album has received a stunning reception from the critics, reaching numerous of 9.5/10 and 9/10 notes and as the consequence – the band being featured in number of publications in Legacy, BreakOut, Orkus! and other magazines. The first single “High In The Sky” and album landed on charts, claiming the first place in Metal and Rock and second place (8th for the single) on iTunes Charts Romania. Second single “Battle Cry” was included in “New Metal Tracks” and “Heavy Metal” playlists on Spotify.
In September 2019 Scarlet Aura joined SOTO on tour with the shows in the UK, Netherlands, Belgium, Sweden, Denmark and Germany.

In December 2019 it was announced that Scarlet Aura would join Visions of Atlantis, Edenbridge and Leecher on 15 European shows in April 2020 to support the release of “Stormbreaker” album. In February 2020 the band was confirmed as special guests for Primal Fear tour in September–October 2020. The tour with Primal Fear was re-scheduled to September 2021 and January 2022, but later was fully cancelled by Primal Fear.