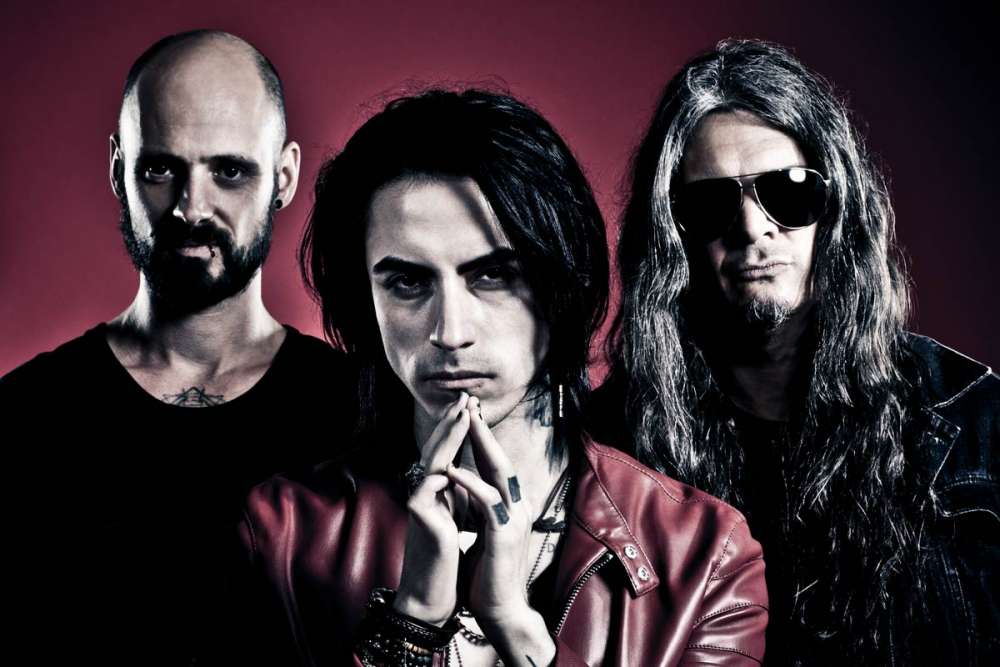 "You must have chaos within you, to give birth to a dancing star"

That must have been what the Schmid brothers had in mind when Christopher (former vocalist, and still songwriter and indispensable asset of the band) came up with the title and cover of their new album Bleeding The Stars.

Without chaos, no creativity – and both are the driving force behind every new adventure. Adventures that, as of now, Lacrimas Profundere (Latin for shedding tears) have experienced in 30 countries, far away from LA’s dazzling theatres. Always with the firm intention to present their band not only in the club next door but worldwide, like for example in Peru or Tokyo.

This unconditional devotion to their own music, the passion to never give up despite all the setbacks but to grow through countless curious, sometimes even strange stories: all this has helped the melancholiacs from Munich to outlast various musical trends over the last 26 years.

But before glancing into the future let us look back: originally starting as a death-doom metal band in 1993, they went the gothic route over time. In 2004, their album AVE END paved the way for their subsequent album FILTHY NOTES FOR FROZEN HEARTS (2006). This chart album is considered a personal milestone, making HIM-fan and US Jackass star Bam Margera take notice: Not only was And God’s Ocean from SONGS FOR THE LAST VIEW covered by both Bam Margera and Alissa White-Gluz, it also served as background music for DAS TOTE MÄDCHEN, an episode of the ZDF’s Monday evening crime show NACHTSCHICHT.

Where’s the adventure, you ask? Well, with THE GRANDIOSE NOWHERE (2010) they toured south America and later China as the headliner. ANTIADORE (2013) – guest composer being none other than Ricky Warwick (The Almighty, Thin Lizzy, Black Star Riders) – enabled their first world tour. Japan, Korea, Mexico, no matter where: Ave End, My Velvet Little Darkness, Again It´s Over, My Release In Pain – the audience knew the lyrics to all of these songs.

With OBLIVION/SPV as their new partner they produced their first concert album titled HOPE IS HERE in 2016. It immediately reached the TOP 30 of the German Charts. Metal Hammer acknowledged the album as well: it was picked for the TOP 10 ranking by not 1 but 2 editors for their charts of the year. With a tour under their belt to support In Extremo and them being the headliner in the motto shows HOPE IS HUMAN (some of those being sold out completely) 2017 provided the next adventure and the next highlight in their band history: a visit to Dubai as the first international gothic band.

“When people travel from crisis zones like Syria or Iran to watch us for one evening and sing along to HOPE IS HERE with closed eyes – ‘getting chills’ doesn’t give the feeling justice”, Olly explains after the concert.

But, as Isaac Newton put it: “What goes up, must come down”, problems were bubbling under the surface. Oliver’s request to return to the sound of their old epic death-doom past wasn’t met with approval from most of the band. If anything, Rob, their vocalist, wanted to leave this kind of music behind for good, but was torn to leave the band after 10 long years. The tour took its toll and new, cherished passions were becoming more and more important for parts of the band.

There were several discussions until Oliver realized that in order for the band to live, they had to kill it first. He and Christopher turned to songwriting to find the band’s soul and essence again.

“These songs are so much more because we had to give it our all”,

he reminisces. But rising from the ashes also meant a new vocalist had to be found for Lacrimas Profundere. That’s when Olly remembered a young talented guy by the name of Julian Larre, who made an impact on him with his cover versions of such different acts as Asking Alexandria, Slipknot or HIM on YouTube. However, between their first contact and the actual meeting Julian had moved from Germany to Helsinki.

“I initially wanted to have a vocalist in Germany to remain flexible, but I just fell in love with that voice, so in the end I probably would have flown the guy in from Alaska. He sounds just like my brother did 20 years ago and can handle the hard vocals”,

Oliver tells us. And laughing, he adds:

“And anyway, it fits in with my concept of running this band without bounds and borders”.

Dominik (already the drummer in ANTIADORE) was fascinated by the new direction and the first demos. Producer Kristian “Kohle” Kohlmannslehner (Hämatom, Powerwolf, Aborted) completed a team that made the impossible possible: weaving a thread between their death-doom past and their rocky chart albums present.

The big bang theory states that matter, space and time emerged 13,8 billion years ago from a primordial singularity, an infinitely small point. This point exploded and the universe expanded in the blink of an eye from the size of an atom to that of a whole galaxy. It hasn’t stopped growing since. So why are we planning every minute of our lives, why do we consider every step we take? In the end we are but a speck of dust without any importance to the universe. Thus was the team’s mindset for everything that followed: A video shoot in Iceland? Why not. A tour without a new album? Bring it on! Everything that counts is the freedom to feel, not think. 12 new songs were created this way, full of new elements, classic goth rock or heavy doom. Is it any wonder that the guys rewarded their very first buyers with a special something? - Four piano versions and one new song which all showcase the beautiful collaboration with Chris Harms (Lord of the Lost) and Tobias Schönemann (The Vision Bleak) are included as a bonus CD give-away and won’t ever be available on websites like Spotify or Apple Music.

Bleeding The Stars invites you to let go, makes you realize that everything ends and nothing is as important as it seems – it’s what the band experienced when recording the songs. Want to take a stroll among the stars in the dark of night? Why not, all you have to do is press “play” and enjoy the accompanying soundtrack – with Bleeding The Stars!